From starting in a verandah, Tulasi Munda‘s Adivasi Vikas Samiti School now provides education up to 10th standard. It enrolls over 500 students and interestingly, more than half of them are girls. Here’s everything you need to know about Odisha’s change maker!
The film TulasiApa has many interesting facets. Based on the life of Tulasi Munda, a social activist from a tribal community, it is the first biographical film in Odiya. The movie charts the hardships and struggles of a lone activist as she worked towards eradicating illiteracy and exploitation that was faced by mine workers in her region. Despite being a Padma Shri awardee and having taught more than 20,000 children in the last 40 years, she continues to remain a lesser-known figure. 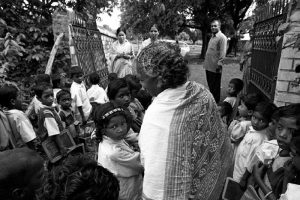 Here’s everything you need to know about Odisha’s very own Tulasi Apa:
1. Tulasi was born in the year 1947, just a month short of India gaining independence from the British. Born in Keonjhar, one of the most backward regions of Odisha, Tulasi, very early in life displayed a different understanding of independence. She grew up with her own notions of freedom and slavery, unlike the conventional ideology that prevailed at large.
2. While other children tended to goats in the fields or worked in the mines, Tulasi wanted to study. Circumstances however were not kind enough and being the youngest amongst her siblings who went to work, Tulasi stayed at home helping her widowed mother with the household chores.
3. Her dreams of studying remained futile as there was neither a school in the village of Kainshi, where she was born, nor did anyone entertain the idea of educating their girl child.
4. Around the time she was 12 years old, Tulasi went to live with her sister in Serenda, another village in the Keonjhar district. Here she worked as a labourer in the iron mines, cutting stones and sifting iron from the waste; for which she was paid ₹2 per week. She never gave up hope and taught herself the alphabets as and when she could.
5. It was during 1961, when her undying thirst for learning brought her in proximity to great women like Malti Chaudhury, Roma Devi and Nirmala Deshpande, who were already well-known for their commitment towards educating women. Tulasi became a part in their village forays and struggles in different parts of the country.
6. It was also during this time that she met the social reformist Vinobha Bhave. He had visited Odisha during the Bhoodan Andolan Yatra. Inspired by his vision and commitment to donate land (bhoodan) and improve the lives of poor villagers, she set on a journey that would change the lives of many people from her village.
7. In 1964, she returned to Serenda and took up the resolution of fighting illiteracy and devoting herself to teaching children, especially girls. Tulasi believed that illiteracy was the worst form of enslavement and the root cause of everything evil around her – poverty, unemployment, drunkenness, superstition and fear.
8. Most villagers found the concept of education a waste of time for boys, who could work in the fields and mines to earn money, and preposterous for girls. However, Tulasi remained headstrong and managed to persuade Serenda’s local pradhan to let her use his verandah for a few hours of teaching.
9. As 30 tribal children trickled in, she started taking evening classes where alphabets and numbers were taught. The initial struggle of convincing parents was very tiresome. Tulasi had to visit each and every house, literally begging the parents to send their children for learning. She even sold murri (puffed rice) and vegetables to raise money.
10. More children were being left at Tulasi’s verandah classroom since many villagers worked all day long and could not look after their small children, something the teacher gladly obliged. Soon, the verandah was too small for of its occupants. In 1966, she shifted her school to a plot of land with a shed and began teaching the children under a Mahua tree.
11. Over the next 50 years, Tulasi helped establish 17 schools and succeeded in educating 20,000 boys and girls. Today, the Adivasi VikasSamiti School provides education up to 10th standard and enrolls over 500 students, more than half of whom are girls.
12. In the year 2001, Tulasi Munda was awarded the Padma Shri award in recognition of her undying spirit and sheer determination in eradicating illiteracy. Almost a decade later, she was bestowed with the Odisha Living Legend Award for Excellence in Social service.
An intriguing life tale isn’t it? Here’s what American journalistSydney J. Harrishad once said, “The whole purpose of education is to turn mirrors into windows.”