Everyday we come across news of physical abuse and rape, were mostly, children, girls and woman are the victim and they live with the agony, which always harm their dignity and authority of their being. We as civil society and NGO organise movements and pressurize government to change law and policies, but hardly find any strong change to deal with the issue. But a woman, made a promise to herself that enough is enough, will never allow anyone to play with her dignity, not just this, she is also training other girls and woman’s how to defend their dignity rather than depending on their man or any other person. 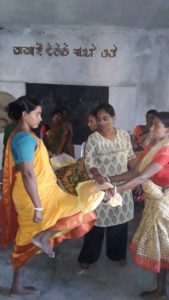 One of her uncle use to touch her inappropriately when she was a child, though she felt bad about his actions but she was unaware how to stop this. One day she thought she should tell this to her mother. Mother too listen to her and gave her a patient hearing to whatever she said, but told her not to tell it to anyone. But her mother encouraged her; speak loud when time comes, as you are not the culprit.

Sutopa Patra now 37 and mother of a kid, grew up in one of the remotest village in Sagar in Sundarbans of West Bengal, India. She fought to continue her studies, as woman in this part of the country are not allowed education and are married off at an early age. Inspite of all this she completed her Graduation and run away from home to Kolkata (Calcutta) city some 100 kilometers away. Inspite of her education she couldn’t find a decent job, so she took up a job of governess. But inside her heart she wanted to do something, her hunger to do something led to her association with Sanghita, a Calcutta based NGO, working for the rights of women.

In Sanghita, she attended a 3 days workshop on Wenlido, which changed her life forever. Wen Lido in simple term is a feminist martial art form and is an important and powerful tool for the empowerment of women and girls. Wen Lido teaches physical, verbal and non-verbal methods of self-defense. In simple words Wen Lido is an art of not only self-defense but it also trains women to mentally attack offenders. “Wen Lido is a magic, it gives 100 other ways to defend yourself from unwanted advances rather then silently accept the pain and become victim”, she adds. 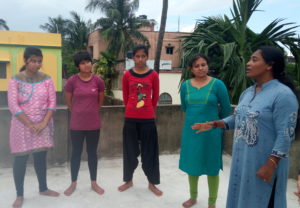 Sutopa now is a professional trainer, from women police force to school going children everybody learns Wen Lido from her. While speaking to this reporter, Sutopa said, “Wen Lido is the weapon, which heals me. The mental agony which I am carrying from childhood gets relived, when I tell girls when anybody touches your private parts tell him, no uncle I cannot allow you to do this to me, I know, I am not liking this”. She also adds, “everyday in bus, public transport, public place and office we face sexual harassment and we cannot stop them but through Wen Lido we can solve this problem”. 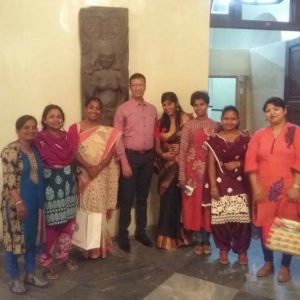 Namit Bajoria of Kutchina Foundation recalling his first meeting with Sutopa says “When I first met her I had seen a spark in her, she was so confident and was ready to help other girls to live a life of dignity by training them with Wen Lido and Kutchina Foundation’s Kutchina Kritika provides financial support to such brave hearts and we decided to support her work”. Bappaditya Mukherjee, Founder of NGO Pranthakatha, who discovered the potential in Sutopa and encouraged her to take up Wen Lido for larger good said “I believe along with policies and laws to protect girls and children from becoming a victim of abuse, they also need to defend themselves and when I find Sutopa’s potential in this I encouraged her and introduced her to Kutchina Foundation, who now funds her training programmes, so that other girls too can learn”.

Clinical Psychologist Shyamolima Datta says “when the patience breaks, one revolts and if given positive direction to that energy it works wonders, in this case of Sutopa, as she herself has gone through the pain of being a victim she better knows how to train minutely”.

Wen Lido Art form started its journey from Toronto in 1970’s when one martial art trainer and his family felt that they should do something to protect the dignity of women, when one of their family become a serial victim and thus Wen Lido was born. Sutopa now trains girls more with responsibility as she herself has gone through the agony, pain and wants every girl to live dignified life.