A normal village girl of a poor farmer family in Kamalpur, an under-developed village in Sagar Island, Sunderbans, Sutapa Patra went through the motions of sexual harassment from many, ever close relatives, but was forced to remain silent on the topic by members of the family.

But she was not the one who would accept the oppression.

An epitome of women strength and determination, Sutapa took on the crusade of self-defense of women by not only learning Wenlido for her own safety but also training numerous other girls and women to identify pain and oppression and give them the strength to grow and work.

Sutapa dreams of a violence free world where women are viewed as equal citizens with valid claims to justice and freedom. 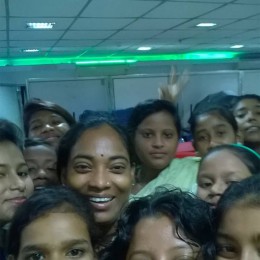 Amader Prerana was set up in 2008 with the vision of working on women and girl issues. The core objective of the organization is to help girls and women gain a greater sense of value and confidence in themselves. Sutapa has been an intrinsic part of the organization processes where  women experience a transformation, as they  realize their own power and capacities.

Till date Sutapa has successfully reached more than 700 women and girls, both urban and rural, and changed their life through Wenlido training for self defense.