Manika’s story is one that reflects the life of many marginalised and disadvantaged women and young girls in our country. But, not her way of fighting the odds. And, that’s what makes our Kutchina Krittika, Manika Sarkar a unique and inspiring soul for millions like her.
A victim-turned-crusader, Manika endured child marriage and survived domestic violence early in life, but she chose to stand up for herself and turned those experiences into weapons to fight against human trafficking in the areas of 24 Parganas (North), West Bengal, bordering Bangladesh.
As a social activist, Manika has inspired the young generation, including her daughters, to take a stand against human trafficking, child marriage, and exploitation of children. She has successfully launched an awareness campaign at the grassroot level against human trafficking and child marriage. 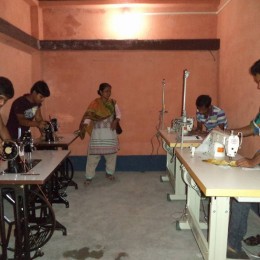 On November 2015, with the support and assistance of Kutchina Foundation, Manika opened a sewing center for promoting and driving economic independence among women victims of trafficking. The center is aimed at training the rescued women on sewing skills, which could help them land jobs in the apparel business or even encourage them to do something on their own.
Currently, there are 30 rescued women working in the sewing center that’s equipped with 20 machines installed for training and production of clothes and garments. See Pics 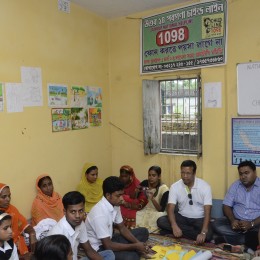 Manika relentlessly channels her struggles and experiences into developing a support system for victims of trafficking and child exploitation. With that objective, she runs Child Line Number 1098 in her area to protect victims of child trafficking and grow resistance and awareness against trafficking and child marriage.
KF actively supports and helps Manika in forming a network of resistance comprising groups of young boys and girls from the trafficking-prone villages. Currently her center supports over 100 survivors of trafficking and more than 70 affected families.
Manika has been awarded by the West Bengal State Women’s’ Commission for her work against child trafficking. Appreciating Manika’s spirit and determination, KF has recognised her as Kutchina Krittika and has extended support to her mission. See Pics